Well if you have notifications coming through to your iPhone, you've probably already seen the headline 'worst inflation since 1981'!  Let's take a look under the hood of the inflation numbers from the Bureau of Labor Statistics to see if we can gain any insights other than the fear the news outlets are pushing. 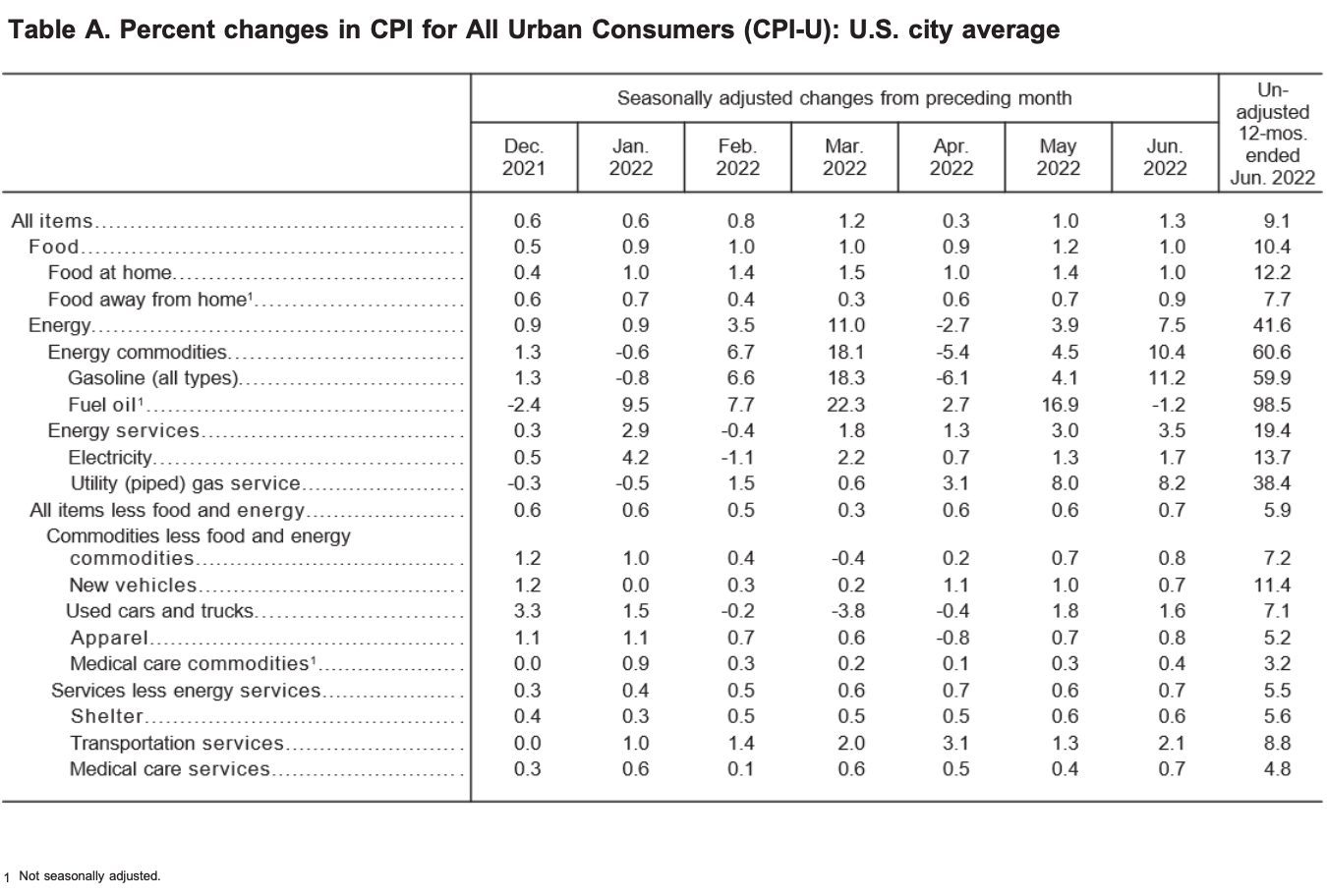 The headline number is 9.1%.  This is comparing June of 2022 versus June of 2021 on an all-items basis. With the loads of data coming out, its difficult to keep in order which numbers are year over year comparisons and which are month over month changes. While 9.1% isn't good, the 'Core' measure of inflation which subtracts out more volatile food and energy price increases was up 5.9% June 2022 versus June 2021. This is actually down from the 6% pace that we saw May 2022 versus May 2021. In other wards, thus far Core inflation has peaked.

Now, as we look through the month over month increases we see that most categories increased their pace of inflation throughout June of 2022 versus the preceding month May 2022 with a couple of exceptions:  Food at home, away from home, new vehicles, used cars and trucks, and airline fares (not listed here).  To breakdown food a bit further, some categories even fell from May of 2022 including: meat, poultry, fish, and eggs.  I think it's important to remember here that energy prices ie. fuel not only increase themselves as a commodity but they also directly impact the prices of other items here due to the fact that fuel is used to transport the goods to our shops and homes.  Energy can directly effect food, apparel, and transportation services as seen here.  It isn't encouraging that fuel was up almost 60% in June 2022 versus June 2021, but the price of WTI crude has fallen since about June 10th down about 14%.

To take the data and apply it further, we ask the question: what does this mean for the Fed's rate hiking policy, and therefore the equity markets?

After the CPI data was released this morning, the chances of the Fed hiking by a full 1.00% (instead of .75%) went up to nearly 50/50 odds. While the market prior to the CPI data was assuming the Fed would only hike by .75% when they meet near the end of July. I think it's safe to say that the Fed is very motivated to get inflation under control by slowing the economy; however, (like we said in our last blog) that the Fed prefers to use the Personal Consumption Expenditures not the CPI as their gauge of inflation.  PCE was down for the month of May and new data on that won't be released until July 29th. While we are certain the Fed will hike just before then, it remains to be seen how many more .75 or 1% hikes need to be implemented. The equity markets this morning gapped lower from Tuesday's closing bell, but have retaken some of those losses this morning narrowing the drop.  If the market can claw onto it's current levels in the midst of the poor headline news, it may just be the first change in sentiment for the market towards a glimmer of hope from it's previous action where it sold off violently after bad CPI data was released.

While we are not out of the woods yet, we are beginning to see some daylight through the woods.  If we look at the S&P 500, it is nearing its average valuation since 2009 on a P/E basis. This is encouraging for long term investors that the bubble we experienced post-pandemic is returning back toward normal levels. 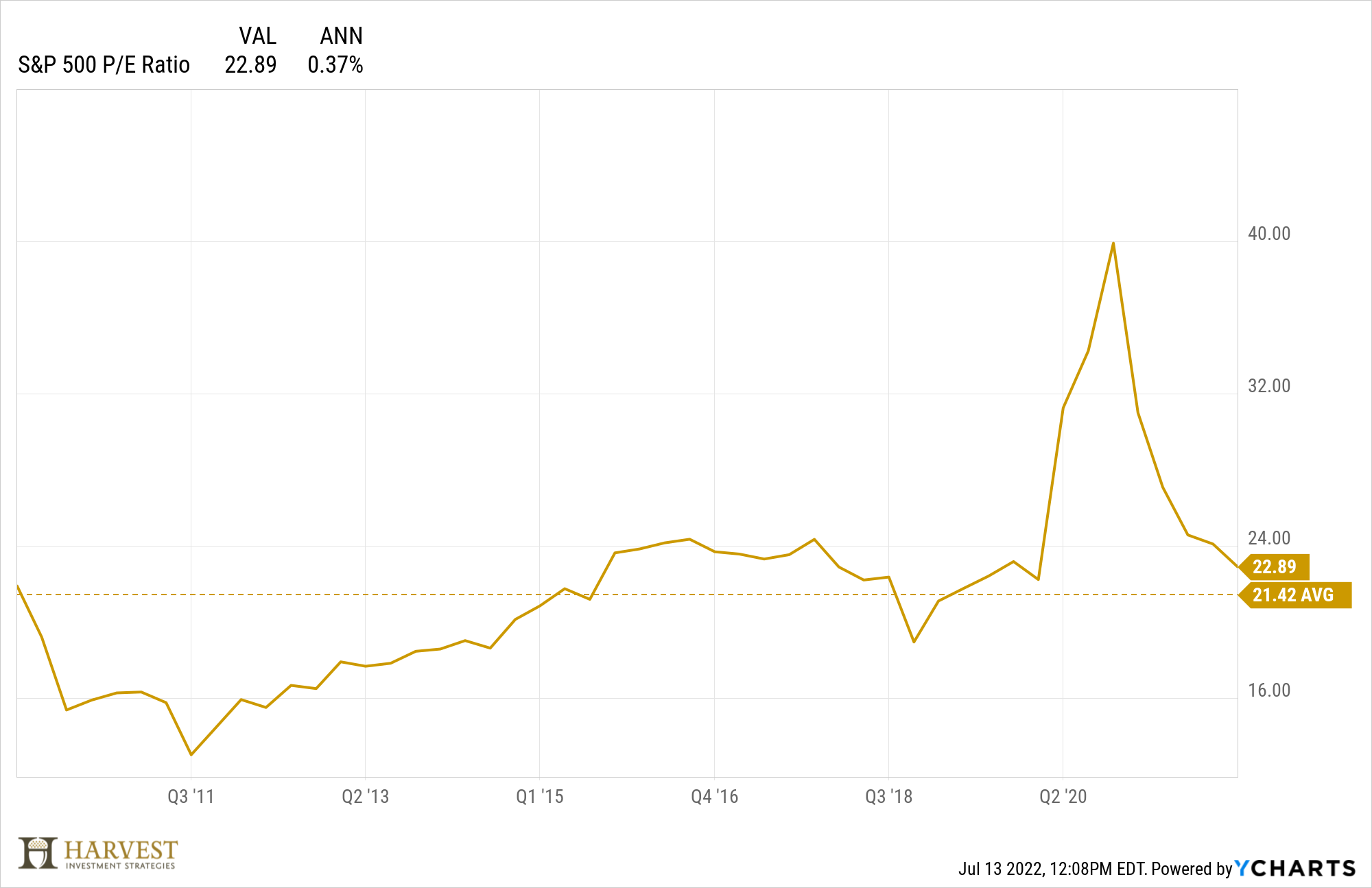