U.S. economic activity contracted for the second consecutive quarter in Q2, data from the Commerce Department showed Thursday.  The Bureau of Economic Analysis's advance estimate of Q2 U.S. gross domestic product (GDP) showed a 0.9% annualized decrease in economic growth for the three-month period ended June 30.  Economists surveyed by Bloomberg expected data to show the U.S. economy grew at an annualized pace of 0.4% last quarter, according to consensus estimates. (each % is a comparison to the prior quarters GDP output).

During the prior quarter, U.S. economic activity unexpectedly contracted for the first time since the second quarter of 2020, when the the COVID-19 pandemic upended the global economy. The government's third and final estimate of first-quarter GDP showed a 1.6% annualized drop in economic growth to start 2022.

The government's preliminary reading on second-quarter GDP — the broadest measure of economic activity — comes one day after Federal Reserve Chair Jerome Powell told reporters at a press conference that he did not believe the economy is in a recession because of how tight and strong the labor market is currently, even as other economic indicators show signs of softening.  Two straight negative GDP prints meet the unofficial definition of a recession, but wait...

The National Bureau of Economic Research (NBER), however, says a recession "is a significant decline in economic activity that is spread across the economy and that lasts more than a few months."

So I guess we will have to wait and see if the NBER declares a recession has occurred in the coming weeks.  One thing we do know is that declaring a recession is backward looking!  Looking forward we ask ourselves if the worst of the slow down has already occurred or if worse disruption is pending.  Then we analyze whether or not the markets have already priced in the most of the risks.  Anecdotally, we have been hearing from everyone for months that 'we are going into recession' and we know that consumer sentiment has been abysmal. 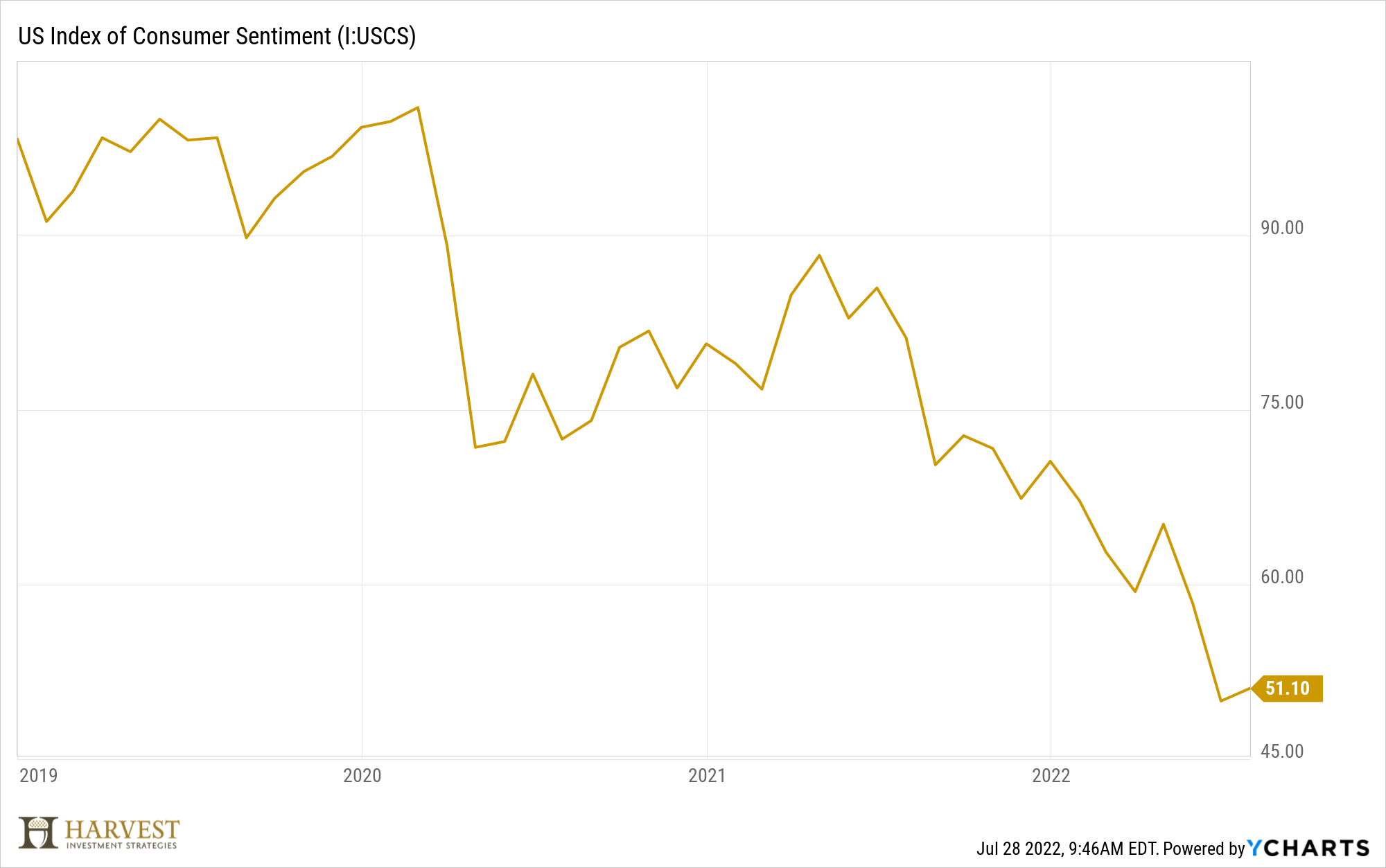 US Index of Consumer Sentiment data by YCharts﻿

﻿We are monitoring the action of the markets through this earnings season closely to see how well prices can hold firm in the midst of bad headline news. Generally, we see the market begin to firm before the bad headlines are finished hitting the tape. Remember this when you are fearful because of the news!